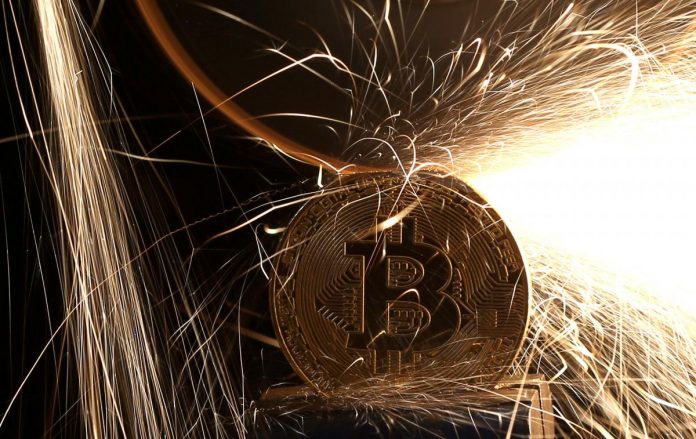 NEW YORK (Reuters) – Stocks that surged in recent weeks because of the cryptocurrency mania have managed to hold onto most of their gains despite the recent retreat in the price of bitcoin and scepticism from market participants.

A Reuters analysis of 17 stocks of companies that have made blockchain or cryptocurrency announcements showed an average gain of 224 percent through Thursday’s close from they released those statements.

For example, shares of Long Island Iced Tea Corp jumped nearly 300 percent on Thursday after the beverage maker said it would rename itself Long Blockchain Corp to reflect a new focus on blockchain technology.

The moves are reminiscent of the tech boom, when the market value of companies such as Zapata and Books-A-Million rose sharply after they announced an internet business or an updated website. After the dot-com bubble burst, many of the companies went out of business or became much less valuable.

“There’s been a continued surge of crypto headlines,” said Michael Antonelli, managing director at Robert W. Baird in Milwaukee. “It’s gotten more worrisome as more companies have changed their names. It’s the kind of stuff you saw back in the dot-com era.”

Many of the crypto stocks came under pressure on Friday, as the price of bitcoin tumbled below $12,000 to put it on track for its worst week since 2013. Riot Blockchain dropped 15.3 percent to $23.36, and Overstock.com, which announced in August that it would accept major alt-coins as payment, was down 6.5 percent at $63.05.

Even with the declines on Friday, bitcoin itself is still more than double from its price at the start of November while the stocks are still well above their prices before the companies made cryptocurrency announcements.

While the stocks are susceptible to price moves in bitcoin itself, analysts caution investors should make sure the company has a credible business model.

“Long term it may hurt these companies because if bitcoin does settle down to being a product that trades like most products and doesn’t have crazy moves every day, it is going to make people look at these companies and ask what is really going on here.”

Deferred mortgage? Why you should check your credit score, Report

$1-million Lotto 6/49 ticket that was purchased in Victoria

Students will return to class on Monday, Legault says

Quebec Premier François Legault announced Wednesday night that the province has received the green light from its public health department to reopen schools as...

The MPP for Chatham-Kent-Leamington warns Ontario could face even greater problems in its supply chain if the federal government follows through with a COVID-19...

COVID-19 hospitalizations are climbing in Alberta with the Edmonton area seeing most of the latest increase. On Tuesday, Alberta reported 708 patients in hospital with...

An early morning home invasion sent two to hospital with non-life-threatening injuries. On Tuesday at 12:50 a.m., police were called to a home in the...

Volkswagen: A look ahead to entry-level electric mobility, world premiere of...

Students will return to class on Monday, Legault says