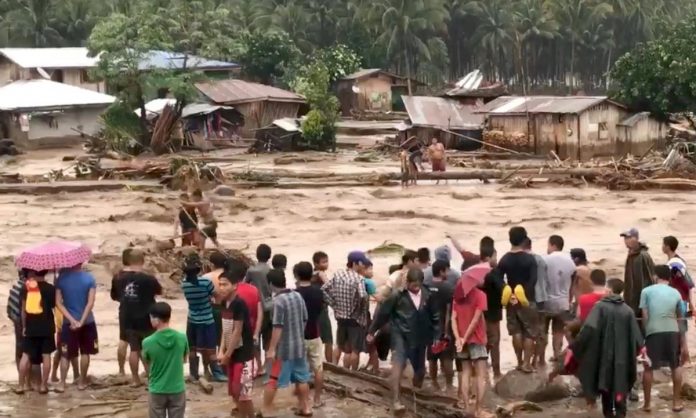 MANILA (Reuters) – A tropical storm in the southern Philippines triggered mudslides and flash floods that killed more than 100 people, while dozens are missing, police and disaster officials said on Saturday.

The casualties, most of them caused late on Friday, were all on the main southern island of Mindanao, they said, adding three provinces were hardest hit.

“Many people were swept to the sea as flood waters quickly rose due to the high tide,” Manuel Luis Ochotorena, a disaster agency official, said. “They never heeded the warnings. They thought it was a weak storm but it dumped more rains.”

Hundreds of kilometers to the east, army and emergency workers were checking reports an entire village was buried by mudslide in Tubod town in Lanao del Norte.

Ryan Cabus, a local official, said power and communication lines to the area had been cut, complicating rescue efforts.

The weather bureau said the storm had gathered strength over the Sulu Sea and was packing winds of up 80 kph (50 mph) and moving west at 20 kph.

It was heading out over the sea by midday on Saturday and would have moved clear of the Philippines by Monday, it said.

A man and his motorcycle are transported on a makeshift raft, after a bridge was destroyed by flash floods in Salvador, Lanao del Norte in southern Philippines, December 23, 2017. REUTERS/Richel V. Umel

Emergency workers, soldiers, police and volunteers were being mobilized to search for survivors, clear debris, and restore power and communications.

More than 100 deaths were reported in various places including 60 in Tubod, El Salvador and Munai towns in Lanao del Norte province.

In Zamboanga del Norte province, police said 42 people had been killed in the towns of Sibuco and Salug.

Three people were killed in Bukidnon province, while politicians in Lanao del Sur province said 18 people had drowned in flash floods there.

Sixty-four people were reported missing in floods and landslides, according to a tally of reports form officials and police.

The Philippines is battered by about 20 typhoons every year, bringing death and destruction, usually to the poorest communities.

Last week, 46 people were killed in the central Philippines when a typhoon hit.