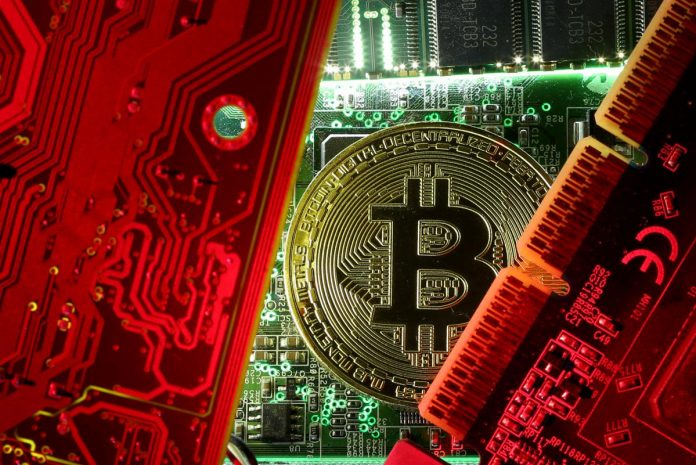 NEW YORK/LONDON (Reuters) – Bitcoin plunged by 30 percent to below $12,000 on Friday as investors dumped the cryptocurrency after its sharp rise to a peak close to $20,000 prompted warnings by experts of a bubble.

After falling to as low as $11,159, it recouped some losses to trade above $14,000 on the Bitstamp platform, down 9 percent on the day. It is down around 25 percent this week, its largest weekly loss since April 2013.

It capped a brutal week that had been touted as a new era of mainstream trading for the digital currency when bitcoin futures debuted on CME Group Inc, the world’s largest derivatives market on Sunday.

Friday’s fall bled into the U.S. stock market, where shares of companies that have lashed their fortunes to bitcoin or blockchain – its underlying technology – took a knock. Long Blockchain Corp, Overstock.com Inc, Riot Blockchain Inc and Marathon Patent Group Inc lost between 2 percent and 15 percent.

The biggest and best-known cryptocurrency has risen around twentyfold since the start of the year, climbing from less than $1,000 to as high as $19,666 on the Luxembourg-based Bitstamp exchange on Sunday and to over $20,000 on other exchanges. But it has fallen each day since.

In the futures market, bitcoin one-month futures <0#XBT:> on Cboe Global Markets were earlier halted due to the steep price drop, while those trading on the CME hit the limit down threshold.

“The crypto markets have experienced several flash crashes over the past few years but we do believe there has been some overvaluation in the market, particularly over recent months,” said Jamie Burke, chief executive officer at venture capital firm Outlier Ventures.

“It’s much more likely this is a natural correction following over-exuberant market sentiment.”

“We didn’t like market conditions and we wanted to re-evaluate what we’re doing,” he told Bloomberg.

His Galaxy Digital Assets Fund was due to start on Dec. 15, but he called clients on Dec. 12 and told them he had changed his mind, Novogratz said in an interview with Bloomberg.

Novogratz told Reuters in November he hoped to raise about $500 million, making it the largest fund of its kind.

FILE PHOTO: A copy of bitcoin standing on PC motherboard is seen in this illustration picture, October 26, 2017. REUTERS/Dado Ruvic/File Photo

Warnings about the risks of investing in the unregulated market have increased – Denmark’s central bank governor called it a “deadly” gamble – and there have been worries about the security of exchanges on which cryptocurrencies are bought and sold.

South Korean cryptocurrency exchange Youbit said on Tuesday it is shutting down and is filing for bankruptcy after it was hacked for the second time this year.

Coinbase, a U.S. company that runs one of the biggest exchanges and provides digital “wallets” for storing bitcoins, said on Wednesday it would investigate accusations of insider trading, following a sharp rise in the price of a bitcoin spin-off hours before it announced support for it.

On Friday, Coinbase said it had temporarily suspended buying and selling of bitcoin due to high traffic.

As some rival cryptocurrencies slid along with bitcoin, the total estimated value of the crypto market fell to as low as $440 billion, according to industry website Coinmarketcap, having neared $650 billion just a day earlier.

But other cryptocurrencies rose this week, with investors moving into cheaper digital coins, rather than cashing out of the sector.

Ethereum, the second-biggest cryptocurrency by market size, soared to almost $900 earlier in the week, from around $500 a week earlier. Ripple, the third-biggest, has more than quadrupled in price since Monday.

Stephen Innes, head of trading in Asia-Pacific for retail FX broker Oanda in Singapore, said there had also been moves out of bitcoin into Bitcoin Cash, a clone of the original cryptocurrency. Oanda does not handle trading in bitcoin.

“Most of it is unsophisticated retail traders getting burned badly,” Innes said on bitcoin’s recent retreat.

While some say the launch by CME and its rival Cboe Global Markets of bitcoin futures over the last two weeks has given the digital currency some perceived legitimacy, many policymakers remain skeptical.

Reporting by Gertrude Chavez-Dreyfuss in New York and Jemima Kelly in London; Additional reporting by Shinichi Saoshiro in Tokyo; Editing by Keith Weir and Susan Thomas

Three people have been charged after allegedly impersonating the owners of a Toronto home and selling it while they were out of the country. According...

Coronavirus: Ottawa ups fine to $5,000 for travellers who refuse to...