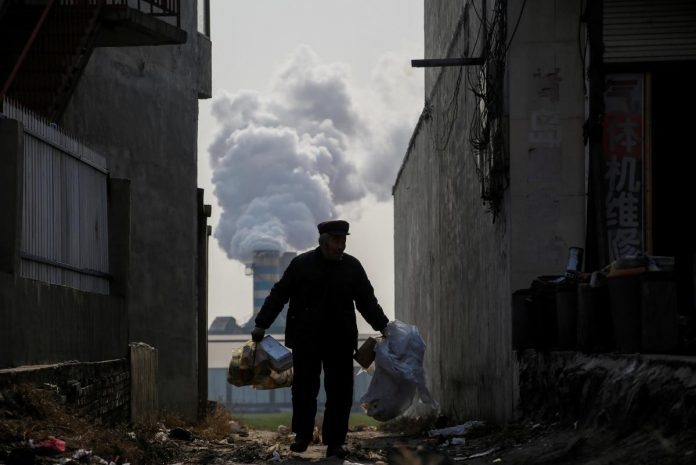 BEIJING (Reuters) – When an inspector from a local environmental protection bureau visited a small village in China’s Shandong province in October to check on a gasification project, she said village officials became tearful in lamenting how far behind schedule they were.

For years, the village has been haunted by pollution from nearby coal mines and chemical plants. The village had been rushing to finish installing new gas boilers for residents as they ditched their old coal stoves, the inspector told Reuters.

The boilers are part of an ambitious gasification program under which millions of households, and some industrial users, are switching from coal to natural gas for heating, as Beijing tries to clean the tainted air in northern China after decades of galloping growth.

The effect of the dramatic switch has been felt globally, with internationally shipped gas prices almost doubling this year to more than $10 per million British thermal units, the highest since the end of 2014.

It has also been felt locally due to poor coordination among government bodies and gas producers, and miscalculations in demand, which have sent gas prices soaring, left many residents freezing in their homes, and shuttered factories.

Where there is gas supply, it cannot reach homes in some cases as the replacement gas infrastructure has not been installed.

“Everyone’s job is linked to whether we can meet the target,” the environmental protection inspector said, declining to be named and refusing to identify the village due to sensitivity of the matter.

In China, policy targets are trickled down to the village official level with the objectives generally understood to be the minimum to be achieved.

“If we did not meet the target, we will get bad performance reviews and we will start worrying about our careers,” the inspector said. She declined to specify the targets.

As the crisis escalates with China entering the coldest weeks of the year, local officials and fuel suppliers have started to point fingers, according to officials with whom Reuters spoke.

It is not uncommon for policies formulated by Beijing to be interpreted differently by local authorities and implemented in varying degrees and at varying speeds.

After coming to power in late 2012, President Xi Jinping warned local governments against taking measures at the grassroots level that are not aligned with national policies.

Executives from major gas suppliers Sinopec and PetroChina told Reuters inadequate communication between government officials and producers over the number and type of projects has caused them to underestimate the pace of the gas expansion program this year.

“The number of gas projects were first reported to the county, then to the city, then the province and other central departments,” said a Sinopec official, declining to be named.

“When it gets to us, it is almost too late to adjust our plans accordingly,” he said.

FILE PHOTO: A man collects recyclables from an alley as smoke billows from the chimney of a factory in rural Gaoyi county, known for its ceramics production, near Shijiazhuang, Hebei province, China December 7, 2017. REUTERS/Thomas Peter/File Photo

In early spring, the Sinopec official estimated that nationwide gas demand could rise as much as 30 billion cubic metres (bcm) this year versus a consensus estimate of less than 15 bcm.

The official said colleagues had initially dismissed his forecast, after three years of lacklustre sales and a warm spring had dampened gas consumption. But it turned out to be true. Gas consumption grew 18 percent in January-September, far outpacing the year-earlier rate.

“By the end of September, we got a sense that shortages were imminent,” the official said. “Sinopec started operating pipelines at full capacity, but it was too late to avoid a gas crisis.”

China National Petroleum Corp (CNPC) and its listed unit PetroChina were also surprised by the surge in demand.

CNPC, the country’s largest producer, estimated in December 2016 that gas consumption would grow 5.9 percent in 2017. Instead, demand rose 19 percent in the first 11 months of this year.

A senior PetroChina official said he had raised concerns about demand, and lifted his consumption growth forecast to as much as 15 percent at senior management team meetings in late June. But his forecast was deemed inaccurate, based on historical trends.

“If we had better coordination with the government and started to prepare for this winter, we would not have such a big problem today,” the PetroChina official said.

On Monday, the Ministry of Environmental Protection (MEP) published an infographic on its social media WeChat account showing Sinopec and CNPC were partly to blame for the deepening winter gas.

In a post called “Revealing the truth about the gas ‘crisis’”, the infographic showed the government’s gasification program was botched partly due to delays in the opening of Sinopec’s Tianjin LNG terminal and reduced supplies from CNPC’s Central Asia pipeline.

“If there is no problem on the gas supply side, demand from coal-to-gas households would be fully met,” the MEP said in the infographic, citing an energy expert.

Executives at gas producers said they are struggling to invest more in costly storage facilities, which take millions of dollars and five to six years to build.

“You can’t do things too fast,” said Daniel Yergin, Vice Chairman of IHS Markit. “My understanding is that the constraints are pipeline distribution systems and storage and LNG receiving terminals.”

Reporting by Meng Meng and Ryan Woo; Additional reporting from Muyu Xu in BEIJING and Henning Gloystein in SINGAPORE; Editing by Bill Tarrant