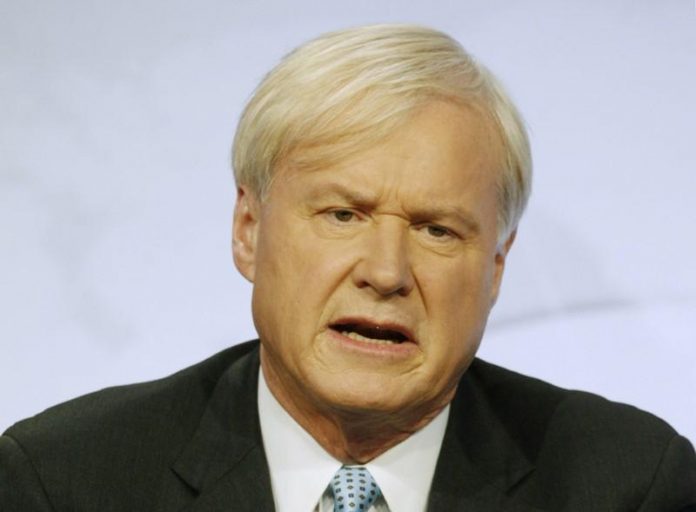 (Reuters) – TV “Hardball” host Chris Matthews was reprimanded after he was accused in 1999 of making inappropriate comments about a female employee, and the woman was given a separation payment, MSNBC said on Sunday.

Representatives for Matthews, 72, did not immediately respond to requests for comment.

The longtime host of the political talk show “Hardball with Chris Matthews” is the latest in a series of powerful men in U.S. media, entertainment and politics to have been accused of sexual misconduct or inappropriate behavior. Many of the allegations are decades old.

In 1999, the employee told CNBC executives that Matthews made inappropriate jokes and comments about her in front of others, a MSNBC spokesperson said in an email. Matthews’ show was on CNBC before it began airing on MSNBC. Both CNBC and MSNBC are affiliated with NBCUniversal, now owned by Comcast Corp.

MSNBC did not identify the employee or describe her role at the network. It did not say when the reprimand was issued or when the payment was made.

A review of the matter found that the comments attributed to Matthews were made in poor taste, but not meant as propositions, the spokesperson said.

Matthews was formally reprimanded and the employee received separation-related compensation, the spokesperson said, declining to elaborate on the size of the payment, citing confidentiality.

The allegations were first reported by the Daily Caller.

In April, political talk show host Bill O‘Reilly left Fox News after the New York Times reported he and his employer made payouts totaling about $13 million to five women to settle claims of sexual harassment and other inappropriate behavior. O‘Reilly denied the claims and said he was unfairly targeted because of his public prominence.

Reporting by Suzannah Gonzales in Chicago; Editing by Frank McGurty and Paul Simao

Vaccination appointments: Manitoba expands COVID-19 vaccine eligibility to 30 and up

Water on Mars thought to have formed 4.4 billion years ago (Study)

Three people have been charged after allegedly impersonating the owners of a Toronto home and selling it while they were out of the country. According...