The Department of Justice on Tuesday announced the results of Operation DisrupTor, a coordinated international effort to disrupt opioid trafficking on the Darknet.

The Joint Criminal Opioid and Darknet Enforcement (JCODE) team was joined by Europol for the announcement on the operation, which was conducted across the United States and Europe, according to a news release.

Officials said that DisrupTor demonstrates the continued partnership between JCODE and Europol against the illegal sale of drugs and other illicit goods and services. “Operation DisrupTor builds on the success of last year’s Operation SaboTor and the coordinated law enforcement takedown of the Wall Street Market, one of the largest illegal online markets on the dark web,” a statement reads.

Following the Wall Street Market takedown in May 2019, U.S. and international law enforcement agencies obtained intelligence to identify Darknet drug traffickers, resulting in a series of complementary, but separate, law enforcement investigations. Operation DisrupTor actions have resulted in the arrest of 179 Darknet drug traffickers and fraudulent criminals who engaged in tens of thousands of sales of illicit goods and services across the United States and Europe.

This operation resulted in the seizure of over $6.5 million in both cash and virtual currencies; approximately 500 kilograms of drugs worldwide; 274 kilograms of drugs, including fentanyl, oxycodone, hydrocodone, methamphetamine, heroin, cocaine, ecstasy, MDMA, and medicine containing addictive substances in the United States; and 63 firearms.

Darknet vendor accounts were identified and attributed to real individuals selling illicit goods on Darknet market sites such as AlphaBay, Dream, WallStreet, Nightmare, Empire, White House, DeepSea, Dark Market and others. By leveraging complementary partnerships and surging resources across the U.S. government and Europol, Operation DisrupTor was used to significantly disrupt the online opioid trade and send a strong message that criminals operating on the Darknet are not beyond the reach of law enforcement.

Operation DisrupTor led to 121 arrests in the United States including two in Canada at the request of the United States, 42 in Germany, eight in the Netherlands, four in the United Kingdom, three in Austria, and one in Sweden. A number of investigations are still ongoing to identify the individuals behind dark web accounts.

“Criminals selling fentanyl on the Darknet should pay attention to Operation DisrupTor,” said Deputy Attorney General Jeffrey Rosen. “The arrest of 179 of them in seven countries—with the seizure of their drug supplies and their money as well—shows that there will be no safe haven for drug dealing in cyberspace.”

“With the spike in opioid-related overdose deaths during the COVID-19 pandemic, we recognize that today’s announcement is important and timely,” said FBI Director Christopher Wray. “The FBI wants to assure the American public, and the world, that we are committed to identifying Darknet drug dealers and bringing them to justice. But our work does not end with today’s announcement. The FBI, through JCODE and our partnership with Europol, continues to be actively engaged in a combined effort to disrupt the borderless, worldwide trade of illicit drugs. The FBI will continue to use all investigative techniques and tools to identify and prosecute Darknet opioid dealers, wherever they may be located.”

“The 21st century has ushered in a tidal wave of technological advances that have changed the way we live,” said DEA Acting Administrator Timothy J. Shea. “But as technology has evolved, so too have the tactics of drug traffickers. Riding the wave of technological advances, criminals attempt to further hide their activities within the dark web through virtual private networks and tails, presenting new challenges to law enforcement in the enduring battle against illegal drugs. Operation DisrupTor demonstrates the ability of DEA and our partners to outpace these digital criminals in this ever-changing domain, by implementing innovative ways to identify traffickers attempting to operate anonymously and disrupt these criminal enterprises.”

“U.S. Immigration and Custom’s Enforcement’s (ICE) Homeland Security Investigations (HSI) has played an integral role in Operation DisrupTor which has effectively removed opioids from our communities,” said ICE Acting Deputy Director Derek Benner. “It has been an honor to work alongside our domestic and international law enforcement partners and pursue bad actors hiding on the Darknet. Our trained cyber analysts and investigators have conducted undercover efforts that target dark website operators, vendors and prolific buyers of these dangerous drugs. HSI special agents employ unique investigative capabilities to trace and identify the proceeds stemming from the distribution and online sales of fentanyl and other illicit opioids. These efforts will continue to thwart a significant amount of criminal drug sale activity and deter criminals believing they can operate with anonymity on the Darknet.”

“The U.S. Postal Inspection Service has worked diligently for years to rid the mail of illicit drug trafficking and preserve the integrity of the mail,” said Chief Postal Inspector Gary Barksdale. “Most importantly, these efforts provide a safe environment for postal employees and the American public. Today’s announcement serves as an outstanding example of the worldwide impact Postal Inspectors can make through our ever-growing partnerships with federal and international law enforcement agencies. On behalf of the U.S. Postal Service, we offer our sincere appreciation to all of our partners in this operation who helped protect the nation’s mail, and we pledge to never relent in our pursuit of criminals seeking to exploit the U.S. mail.”

“Law enforcement is most effective when working together, and today’s announcement sends a strong message to criminals selling or buying illicit goods on the dark web: the hidden internet is no longer hidden, and your anonymous activity is not anonymous,” said Edvardas Šileris, the Head of Europol’s European Cybercrime Centre (EC3). “Law enforcement is committed to tracking down criminals, no matter where they operate – be it on the streets or behind a computer screen.”

The extensive operation, which lasted nine months, resulted in over dozens of federal prosecutions including:

The Los Angeles JCODE Task Force, in conjunction with the U.S. Attorney’s Office for the Central District of California, successfully dismantled a drug trafficking organization that used online monikers such as “Stealthgod” to sell methamphetamine and MDMA on multiple Darknet marketplaces. Investigators have linked the crew to more than 18,000 illicit drug sales to customers in at least 35 states and numerous countries around the world. During law enforcement actions in Southern California earlier this year, members of JCODE arrested five defendants and seized approximately 120 pounds of methamphetamine, seven kilograms of MDMA and five firearms. Two of the five – Teresa McGrath, 34, of Sunland-Tujunga, and Mark Chavez, 41, of downtown Los Angeles – have since pleaded guilty to narcotics-trafficking and other offenses, and each faces a 15-year mandatory minimum sentence. As the investigation continued, the Los Angeles JCODE Task Force made additional seizures, including $1.6 million in cryptocurrency, 11 pounds of methamphetamine and 14 pounds of pills pressed with methamphetamine. Andres Bermudez, 37, of Palmdale, California, who allegedly was a main supplier of methamphetamine to the “Stealthgod” crew, was charged last week with a narcotics-trafficking offense that carry a 10-year mandatory minimum sentence. He is considered a fugitive.
Arden McCann, 32, of Quebec, Canada, was charged with conspiring to import drugs into the United States and money laundering conspiracy, in a four-count indictment returned by a grand jury in Atlanta, Georgia. According to court documents, the defendant is alleged to have imported alprazolam, fentanyl, U-47700, and fentanyl analogues such as carfentanil, furanyl fentanyl, 4-fluoroisobutyryl fentanyl, acryl fentanyl, and methoxyacetyl fentanyl into the United States from Canada and China. The superseding indictment alleges that fentanyl analogues the defendant imported into the United States resulted in a non-fatal overdose in April 2016, and fentanyl the defendant imported into the United States resulted in an overdose death in December 2016.

Khlari Sirotkin, 36, of Colorado; Kelly Stephens, 32, of Colorado; Sean Deaver, 36, of Nevada; Abby Jones, 37, of Nevada; and Sasha Sirotkin, 32, of California, were charged with drug trafficking and money laundering conspiracy, in a 21-count indictment returned by a grand jury in Cincinnati, Ohio. According to court documents, the defendants are alleged to be members of one of the most prolific online drug trafficking organizations in the United States and allegedly specialized in the manufacturing and distribution of more than one million fentanyl-laced counterfeit pills and laundered approximately $2.8 million over the course of the conspiracy. The pressed fentanyl pills, along with heroin, methamphetamine and cocaine, were shipped to the Southern District of Ohio and throughout the country. FBI, DEA, FDA, HSI and USPIS agents seized 2.5 kilograms of fentanyl; 5,095 pressed xanax; 50 suboxone; 16.5 grams of cocaine; 37 grams of crystal meth; 12 grams of black tar heroin; an industrial pill press; 5,908 pounds of dried marijuana with an estimated street value of $9 million; $80,191 in cash, 10 firearms and one pound of fentanyl.

The FBI Washington Field Office’s Hi-Tech Opioid Task Force, in conjunction with the U.S. Attorney’s Office for the Eastern District of Virginia, successfully thwarted a firebomb attack plot involving explosives, firearms, the Darknet, prescription opioid trafficking, cryptocurrency, and sophisticated money laundering. William Anderson Burgamy, 33, of Hanover, Maryland, and Hyrum T. Wilson, 41, of Auburn, Nebraska, pleaded guilty in the Eastern District of Virginia to charges related to a conspiracy to use explosives to firebomb and destroy a competitor pharmacy in Nebraska. Burgamy, who is not a pharmacist, operated as the Darknet vendor NeverPressedRX (NPRX) since at least August 2019. Wilson, who was a licensed pharmacist, illegally mailed to Burgamy over 19,000 dosage units of prescription medications, including opioids, from his pharmacy in Nebraska. Burgamy illegally sold prescription drugs through his Darknet vendor account to customers nationwide, and claimed at one point that he made nearly $1 million total. Burgamy and Wilson agreed that Burgamy and another individual would carry multiple firearms during the attack operation and use explosives, specifically Molotov cocktails enhanced with Styrofoam as a thickening agent, to burn the victim pharmacy down in furtherance of their drug trafficking scheme. Law enforcement agents seized thousands of opioid pills, eight unsecured firearms, including two loaded AR-15 assault rifles with high capacity magazines, and over $19,000 cash. Prior to Burgamy’s arrest in April 2020, which uncovered and thwarted the firebombing plot, Burgamy and Wilson fully intended on the attack occurring after COVID-19 restrictions were lifted.

Aaron Brewer, 39, of Corsicana, Texas, was charged with conspiracy to possess with intent to distribute a controlled substance and distribution of a controlled substance in a two-count indictment returned by a grand jury in the Northern District of Texas. According to court documents, the defendant allegedly sold cocaine, heroin, and other drugs via the dark web. He allegedly accepted payment in cryptocurrency, primarily bitcoin, and then shipped the drugs to customers’ addresses through the U.S. mail and other shipping services. Following Mr. Brewer’s arrest on July 2, agents with the U.S. Postal Inspection Service and FBI Dallas Field Office seized roughly 650 grams of black tar heroin, cocaine, and OxyContin, two computers, and more than $870 in postage stamps, as well as a ledger outlining 757 drug shipments sent to 609 unique addresses between December 2019 and March 2020.

An indictment and criminal complaint merely alleges that crimes have been committed. The defendants are presumed innocent until proven guilty beyond a reasonable doubt in a court of law. 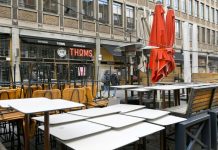 The Netherlands will ban many flights and impose a nationwide curfew, Report