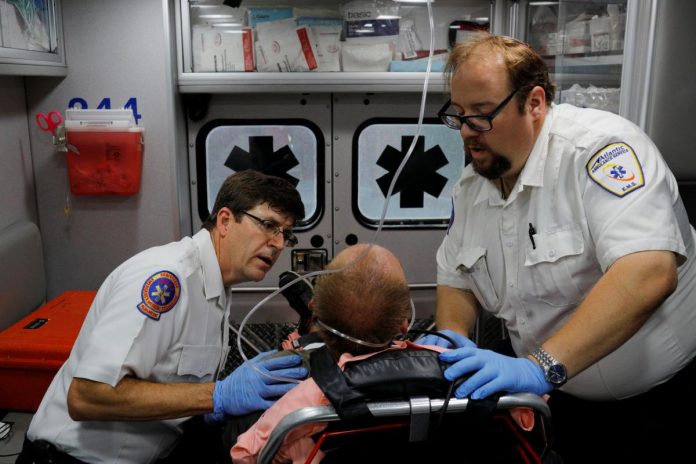 For the Cataldo Ambulance Service crews outside Boston on the front lines of the U.S. opioid epidemic, the flood of overdose calls is a grim daily reality, despite expanded access to overdose reversal drugs.

“When I started, this was a rare thing. You did one or two here and there. Now, we do quite a few,” said Dave Franklin, 44, a supervisor at the private service that contracts with cities who has worked in the field for more than 20 years.

Amid wider use by bystanders and police of naloxone, a drug that reverses overdose symptoms, state figures showed a small drop in opioid deaths in the first nine months of 2017 compared with 2016. But Franklin does not yet see a turning point.

“It’s not going away anytime soon. People are still dying regularly,” he said.

In the United States, deaths from drug overdoses have surpassed deaths by firearms and motor vehicle crashes, according to a 2017 Drug Enforcement Administration report.

President Donald Trump has declared a public health emergency over opioid abuse, promising to increase treatment but initially dedicating no money for it.

On Thursday, the Centers for Disease Control reported, based on the latest available figures, that the U.S. rate of drug overdose deaths in 2016 grew 21 percent from the prior year.

“It’s hard to watch, and it’s devastating,” said Domenic Corey, 27, who has seen the evidence up close working as a Cataldo paramedic.

Cataldo Ambulance medics John Gardner (L) and David Farmer care for a man in his 40’s who was found unresponsive after overdosing on an opioid in the Boston suburb of Salem, Massachusetts, U.S., August 9, 2017. REUTERS/Brian Snyder

At the ambulance, he checks to make sure there is enough naloxone. They carry more than double the amount they once did because stronger opioids mean that multiple doses of naloxone are often required for someone who is barely breathing.

Simpson, 34, works at least two 24-hour shifts a week in a high-turnover job that can be stressful and where pay starts at $14 an hour. Just touching Fentanyl can send an EMS worker into overdose.

Simpson’s radio crackles with calls. Difficulty breathing. Person down. Unresponsive. Overdose. They turn on the lights and roll. From experience, they know it might be a man who overdosed into unconsciousness while driving, a teen or elderly user passed out in a park or an already stiffened corpse in a hotel room strewn with needles and powder.

On arrival, they spray naloxone up the nose or inject it into the user, pump oxygen into lungs and wait. Some respond gulping for air or vomiting and confused.

“Why are you in my house? What’s going on?” Simpson recalled as a common question from recipients of his aid. Some people are grateful and repentant, crying, shaking hands and promising to get treatment. Others deny they took drugs at all.

The calls often come in waves when fentanyl too potent for users hits the streets. Time of day matters, too.

“If it’s in the afternoon, there’s a much better chance they are still alive,” he said. “If we get the call at 7 a.m., they probably shot up the night before.”

The paramedics say they often see families torn apart in front of their eyes or bereaved parents.

“You see the parents, they’re crushed; just the look of defeat, you know? They lost the most important person in the world to them. I can’t even imagine. But you see it over and over again,” Corey said.

The cost of naloxone has risen with demand, eating into the service’s budgets, Franklin said. But they are also using their steady overdose runs to help some cities map drug hotspots and for police to visit users to urge them into treatment.

“In the back of the ambulance, you talk to them and hope they get treatment,” Simpson said, explaining that most agree they need to get help. “But then at times I’ll see the same person three months down the line and they have overdosed.”

Newfoundland and Labrador Reporting 25 Now in Hospital Due To COVID-19, 11 Critical

Coronavirus: 85% of Albertans 12 and older are fully vaccinated

Two people are dead and B.C.'s police watchdog is investigating following a police pursuit that ended in a horrific crash. Abbotsford police say the incident...

Police: Missing Toronto man may be in Windsor

Toronto police are requesting the public’s help locating a 96-year-old man who has been missing since Monday and might possibly be on his way...

An 11-year-old girl missing from Stratford, Ont. has been found safe. Around 6:15 p.m. Tuesday, Stratford police confirmed by phone the child has been found...