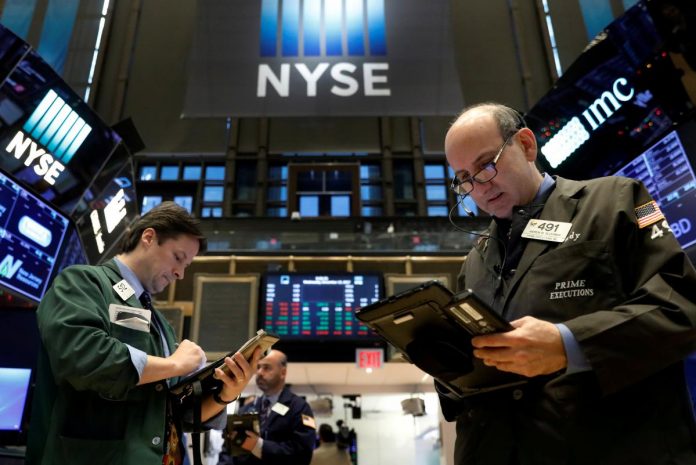 Investors are winding down ahead of Christmas on Monday, when the market will be closed.

“It’s been a strong week,” said Mark Luschini, chief investment strategist at Janney Montgomery Scott in Philadelphia. “Whether the market is up a little bit or down a little bit is not indicative of larger trends … It’s easy to push things around when not many people are trading.”

Indeed, major Wall Street indexes were on track to end the week higher, buoyed by a historic overhaul of the U.S. tax code.

Wildly volatile bitcoin BTC=BTSP plunged below $12,000, losing around a third of its market value in five days, before rebounding to above $14,000. Companies that have been riding the bitcoin wave were hit hard by the cryptocurrency’s slump.

Long Blockchain Corp (LTEA.O), Overstock.com Inc (OSTK.O), Riot Blockchain Inc (RIOT.O) and Marathon Patent Group Inc (MARA.O) tumbled between 2 percent and 15 percent. But even with Friday’s losses, their share prices are higher now than before the companies ventured into bitcoin.

The benchmark S&P has climbed about 20 percent this year and is on track for its best performance since 2013 on solid corporate earnings, strong economic fundamentals, upcoming cuts to corporate tax rates and hopes of looser regulations.

Real estate .SPLRCR led the S&P 500 in gains, with a 0.7 percent rise. Health .SPXHC was the biggest decliner, falling 0.3 percent.

Advancing issues outnumbered declining ones on the NYSE by a 1.04-to-1 ratio; on Nasdaq, a 1.30-to-1 ratio favored decliners.

Volume on U.S. exchanges was 4.81 billion shares, compared to the 6.98 billion average for the full session over the last 20 trading days.

Coronavirus: A look at COVID-19 vaccinations in Canada on Monday, April 5, 2021

Calgary police have charged one man who was found to have THC in his system during a single-vehicle crash that left one woman dead. CPS...

Teen girl charged after threat made to Hamilton school