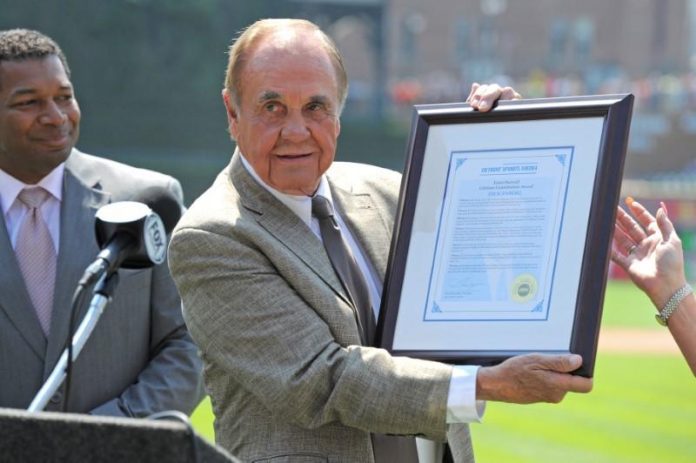 (Reuters) – U.S. broadcaster Dick Enberg, who charmed sports fans with his “Oh My!” declaration as he called some of the most memorable sporting events during the last five decades, died on Thursday, ESPN reported. He was 82.

Enberg was found dead at his home in San Diego. His wife Barbara told the San Diego Union-Tribune that her husband failed to catch a Thursday flight to Boston, where they were supposed to meet.

“He was dressed with his bags packed at the door,” she said. “We think it was a heart attack.”

Enberg worked for NBC, CBS and ESPN, calling some of the world’s biggest sporting events, including 10 Super Bowls, 28 Wimbledons and eight NCAA men’s basketball title games, according to ESPN.

Enberg was born and raised in Michigan and graduated from Central Michigan University, where he began his broadcasting career, ESPN reported. He moved to California and covered the UCLA Bruins basketball team, which won eight NCAA titles during his tenure.

“Sportscasting is a kid’s dream come true, which is one of the reasons that I keep doing it,” he said in his autobiography, according to the Los Angeles Times. “I can’t let my dream go. I‘m still love with what I do.”

In 1968, Enberg called what was dubbed the “The Game of the Century” between UCLA and the Houston Cougars, the first prime time NCAA regular-season game broadcast nationwide, according to ESPN. The Bruins’ 47-game winning streak came to an end that night.

“That was the platform from which college basketball’s popularity was sent into the stratosphere,” Enberg said about the game, ESPN reported. “That became a monumental event.”

His last job was calling San Diego Padres games, which he retired from in 2016.

“We are immensely saddened by the sudden and unexpected passing of legendary broadcaster Dick Enberg,” the Padres said in a statement released late on Thursday to the San Diego Union-Tribune.

Despite leaving the broadcast booth, he continued to work on his podcast “Sound of Success,” which last aired on Thursday with an interview of Andy Friendly, a TV producer and executive, ESPN reported.

“I am talking to broadcast royalty today, and I am thrilled to be doing it,” Friendly said, according to ESPN.

Reporting by Brendan O’Brien in Milwaukee; Editing by Kevin Liffey and Sonya Hepinstall

Coronavirus Canada updates: The latest numbers on COVID-19 on May 23, 2020

Coronavirus Canada Update: B.C. now has 28 cases of the U.K. and South African...