Following its surprise reveal at the end of The Mandalorian’s season 2 finale, Disney and Lucasfilm have formally announced production on The Book of Boba Fett, a new Star Wars spinoff series starring Temuera Morrison and Ming-Na Wen.

Appearing on Good Morning America on Monday morning, Jon Favreau confirmed that The Book of Boba Fett is separate from The Mandalorian season 3. Favreau will serve as an executive producer on the new series alongside Dave Filoni and Robert Rodriguez, who directed Chapter 14 of The Manalorian and reintroduced Boba Fett to the Star Wars universe.

Production on The Book of Boba Fett is set to begin early next year ahead of a planned December 2021 release on Disney+. Favreau said that once they wrap filming on Boba Fett, his team will begin working on the third season of The Mandalorian.

The Book of Boba Fett is the 11th known Star Wars project announced by Disney+. It joins Ahsoka and Rangers of the New Republic, two other offshoots of The Mandalorian being produced by Favreau and Filoni.

Also in the works are an Obi-Wan Kenobi limited series starring Ewan McGregor and Hayden Christensen; series focused on beloved characters Cassian Andor and Lando Carlissian; and a mystery thriller called The Acolyte from Russian Doll creator Leslye Headland. There are also several animated Star Wars projects on the way, in addition to feature films from Taika Waititi and Patty Jenkins.

Last week, Jeremy Bulloch, who played Boba Fett in the original Star Wars film trilogy, passed away at the age of 75.

The Book of Boba Fett, a new Original Series, starring Temuera Morrison and Ming-Na Wen and executive produced by Jon Favreau, Dave Filoni and Robert Rodriguez, set within the timeline of The Mandalorian, is coming to @DisneyPlus Dec. 2021. pic.twitter.com/YT2zbLufI8 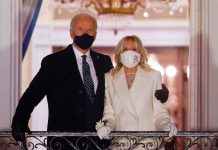 Coronavirus Canada Updates: Ottawa breaks record for most COVID-19 cases with 194 on New...

First lady Jill Biden sent a beautiful message of unity with her outfit on the evening of President Biden’s inauguration — and one accessory...

New Brunswick health officials are expected to provide a provincial update on the coronavirus on Thursday. Premier Blaine Higgs will be joined by Dr. Jennifer...

Some Saskatchewan sports organizations are turning to fundraising in order to keep their doors open amid current COVID-19 restrictions. Prior to the pandemic, owner of...

The Saskatchewan Health Authority says two cases of COVID-19 have been diagnosed at École Massey School. For the safety of students and staff, and in...