Scientists often study the genomes of individual organisms to try to tease out the relationship between genes and behavior. A new study of Africanized honey bees reveals, however, that the genetic inheritance of individual bees has little influence on their propensity for aggression. Instead, the genomic traits of the hive as a whole are strongly associated with how fiercely its soldiers attack.

The findings are reported in the Proceedings of the National Academy of Sciences.

“We’ve always thought that the most significant aspects of an organism’s behavior are driven, at least in part, by its own genetic endowment and not the genomics of its society,” said Matthew Hudson, a University of Illinois at Urbana-Champaign professor of bioinformatics in the department of crop sciences who led the research with Gene Robinson, an entomology professor and the director of the Carl R. Woese Institute for Genomic Biology at the U. of I. “This is a signal that there may be more to the genetics of behavior as a whole than we’ve been thinking about.”

The researchers focused on a unique population of gentle Africanized honey bees in Puerto Rico, which have evolved to become more docile than Africanized bees anywhere else in the world.

“We wanted to know which parts of the genome are responsible for gentle behavior versus aggressive behavior,” Hudson said. “And because there’s quite a bit of variation in aggression among these bees, they are an ideal population to study.”

Africanized bees are hardier and more resistant to disease than their European predecessors on the island, so scientists are eager to learn more about the genetic underpinnings of the Puerto Rican bees’ gentle nature.

When a honey bee hive is disturbed, guard bees emit a chemical signal that spurs soldier bees into action. The response depends on the nature of the threat and the aggressiveness of the hive. Whether the soldiers sting their target is another measure of aggression, as soldiers that sting will die as a result.

In general, foragers do little to defend the hive.

The researchers compared the genomes of soldier and forager bees from each of nine honey bee colonies in Puerto Rico. They also tested how aggressively the soldier bees responded to an assault on the hive.

To their surprise, the scientists found no genome-sequence differences between the soldiers and foragers that consistently explained the different responses.

But when the researchers conducted a genomewide association study comparing the most-aggressive and least-aggressive hives, they saw a strong correlation between hive genomics and aggression. The analyses revealed that one region of the genome appeared to play a central role in the hives’ relative gentleness or aggression.

“There was one chunk of DNA where the frequency of that chunk in the hive seems to dictate how gentle that hive is going to be to a large extent,” Hudson said. “What that tells us is that the individual genetic makeup of the bee doesn’t have a strong influence on how aggressive it is. But the genetic makeup of the society that the bees live in – the colony – has a very strong impact on how aggressive the bees in that colony are.”

“Many behavioral traits in animals and humans are known to be strongly affected by inherited differences in genome sequence, but for many behaviors, how an individual acts also is influenced by how others around it are acting – nature and nurture, respectively,” Robinson said. “We now see that in the beehive, nurture can also have a strong genomic signature.”

Such behavioral genomic influences may be particularly pronounced in honey bees, which live in an extraordinarily cooperative society where each individual has a defined social and functional role, he said.

Coronavirus Canada Updates: 1M vaccine doses to be delivered every week in next phase... 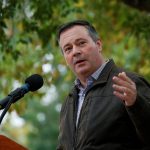 Alberta Health Services has administered nearly 90,000 doses to eligible health-care workers and staff and residents in continuing care around the province to date,...

There are four more deaths and 118 cases of COVID-19 in Manitoba on Monday. All of the deaths are connected to current outbreaks, including a...

A new survey released Monday by Doctors Manitoba shows physicians want to help out with COVID-19 vaccinations. Over 500 doctors responded to the survey and...

The Ontario government is providing up to $125 million to immediately add over 500 critical care and high intensity medicine beds to hospitals in...

Ontario Premier Doug Ford will make an announcement in York Region on Monday amid a rising number of COVID-19 cases in the province. The premier’s...

US Election Final Results 2020 LIVE: Trump told one falsehood after...