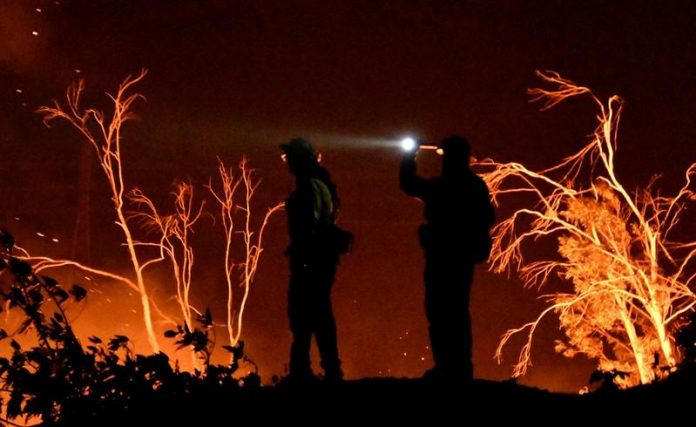 LOS ANGELES (Reuters) – Crews battling to subdue the remnants of a sprawling Southern California wildfire gained more ground on Thursday after a resurgence of winds proved weaker than expected, allowing officials to lift all remaining evacuation orders and warnings.

The fire’s spread was largely halted this week as crews extended safety buffer lines around most of its perimeter, hacking away thick chaparral and brush before it could ignite and torching some vegetation in controlled-burning operations.

Containment of the fire grew to 65 percent on Thursday, up from 60 percent a day earlier.

Much of the progress was made during three days in which diminished winds, cooler temperatures and higher humidity levels allowed firefighters to go on the attack against a blaze that had kept them on the defensive for the better part of two weeks.

A new bout of strong winds had been forecast to accelerate to 50 miles per hour (80 km per hour) on Thursday morning, stoking extreme fire conditions again, but turned out to be less forceful than expected, authorities said.

“We didn’t really see the winds that were predicted,” said Brandon Vaccaro, a spokesman for the firefighting command. Containment lines already carved around populated areas “held really well,” he said.

More than 1,000 homes and other structures were destroyed and well over 100,000 people were forced to flee their dwellings at the height of the fire storm, but abandoned communities were gradually reopened to residents this week.

Only one fatality directly related to the fire has been reported, a firefighter who succumbed to burns and smoke inhalation in the line of duty last Thursday.

As the fire threat waned, the number of personnel assigned to fight the blaze has been scaled back to about 4,700, down from 8,500 at the fire’s peak.

In terms of burned landscape, the Thomas fire ranks a close second to California’s largest wildfire on record, the 2003 Cedar blaze in San Diego County, which consumed 273,246 acres (110,579 hectares) and killed 15 people.

Forecasts called for a return of mild Santa Ana gusts late on Thursday, “but it shouldn’t be anything that really challenges us,” Vaccaro said.

The California Department of Forestry and Fire Protection has estimated the cost of fighting the blaze at more than $167 million. The cause has not been determined.

The Thomas fire came two months after a spate of wind-driven blazes in Northern California’s wine country incinerated several thousand homes and killed more than 40 people, ranking as the deadliest rash of wildfires, and one of the most destructive, in state history.

Additional reporting by Brendan O’Brien in Milwaukee and Peter Szekely in New York; Editing by Chris Reese and Leslie Adler

Report: Is Moderna Stock a Buy or Sell After Johnson & Johnson’s Vaccine News?

By the end of July, Canada will have received “over 68 million” doses of COVID-19 vaccines, Prime Minister Justin Trudeau announced Friday, resulting in...

A video, showing a Montreal police (SPVM) officer kneeling on a young Black man's neck, has sparked outrage and calls for an investigation by...

Alberta will move to the third stage of its reopening plan on July 1, meaning all health measures will be lifted, Premier Jason Kenney...

Police: Manitoba murder suspect may be headed toward Northwestern Ontario

A Manitoba homicide suspect has been spotted near the Ontario border. Manitoba RCMP says Eric Wildman was last seen driving eastbound on Highway 44...

Ontario to spend millions in an effort to recruit French teachers due to shortage,...

Ontario will pour $12.5 million into recruiting and training French teachers over the next four years in an effort to address a shortage made...

Study: In the eye of a stellar cyclone

Coronavirus: Where to find a pop-up COVID-19 vaccine clinic in Toronto...