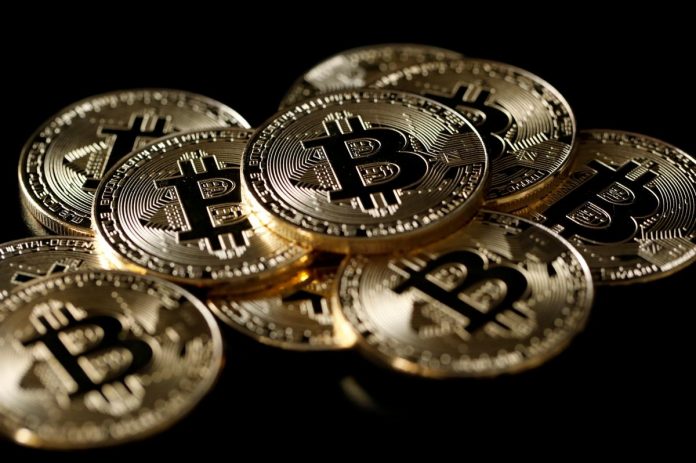 NEW YORK/LONDON (Reuters) – Bitcoin plunged by a quarter to below $12,000 on Friday as investors dumped the cryptocurrency in manic trading after its blistering ascent to a peak close to $20,000 prompted warnings by experts of a bubble.

It capped a brutal week that had been touted as a new era of mainstream trading for the volatile digital currency when bitcoin futures debuted on CME Group Inc (CME.O), the world’s largest derivatives market on Sunday.

Friday’s steep fall bled into the U.S. stock market, where shares of companies that have recently lashed their fortunes to bitcoin or blockchain – its underlying technology – took a hard knock in early trading.

The biggest and best-known cryptocurrency had seen a staggering twentyfold increase since the start of the year, climbing from less than $1,000 to as high as $19,666 on the Luxembourg-based Bitstamp exchange BTC=BTSP on Sunday and to over $20,000 on other exchanges.

Bitcoin has fallen each day since, with losses accelerating on Friday.

In the futures market, bitcoin one-month futures <0#XBT:> on Cboe Global Markets were halted due to the steep price drop, while those trading on the CME BTCF8 hit the limit down threshold.

In the spot market, bitcoin fell to as low as $11,159, down more than 25 percent on the Luxembourg-based Bitstamp exchange BTC=BTSP, its largest one-day drop in nearly three years. For the week, it was down around a third – its worst performance since April 2013.

“After its parabolic-like rally, a crash was imminent and so it has proved,” said Fawad Razaqzada, market analyst at Forex.com in London. “Investors may have also been put off buying bitcoin at those elevated levels amid repeated warnings from experts about the way it had climbed near $20,000.”

“A manic upward swing led by the herd will be followed by a downturn as the emotional sentiment changes,” said Charles Hayter, founder and chief executive of industry website Cryptocompare in London. “A lot of traders have been waiting for this large correction.”

“With the end of the year in sight a lot of investors will be taking profits and saying thank you very much and closing their books for the holiday period,” he added.

Warnings about the risks of investing in the unregulated market have increased – Denmark’s central bank governor called it a “deadly” gamble – and there have been worries about the security of exchanges on which cryptocurrencies are bought and sold.

South Korean cryptocurrency exchange Youbit said on Tuesday it is shutting down and is filing for bankruptcy after it was hacked for the second time this year.

Coinbase, a U.S. company that runs one of the biggest exchanges and provides digital “wallets” for storing bitcoins, said on Wednesday it would investigate accusations of insider trading, following a sharp increase in the price of a bitcoin spin-off hours before it announced support for it.

As rival cryptocurrencies slid along with bitcoin, the total estimated value of the crypto market fell to as low as $440 billion, according to industry website Coinmarketcap, having neared $650 billion just a day earlier.

But other cryptocurrencies surged this week, with investors moving into cheaper digital coins, rather than cashing out of the sector.

Ethereum, the second-biggest cryptocurrency by market size, soared to almost $900 earlier in the week, from around $500 a week earlier. Ripple, the third-biggest, has more than quadrupled in price since Monday.

Stephen Innes, head of trading in Asia-Pacific for retail FX broker Oanda in Singapore, said that there have also been moves out of bitcoin into Bitcoin Cash, a clone of the original cryptocurrency. Oanda does not handle trading in bitcoin.

“Most of it is unsophisticated retail traders getting burned badly,” Innes said on bitcoin’s recent retreat.

While some say the launch by CME and its rival Cboe Global Markets of bitcoin futures over the last two weeks has given the digital currency some perceived legitimacy, many policymakers remain sceptical.

To view a graphic on Bitcoin moves this year click on this link reut.rs/2BVVXQd

Reporting by Gertrude Chavez-Dreyfuss in New York and Jemima Kelly in London; Additional reporting by Shinichi Saoshiro in Tokyo; Editing by Keith Weir and Susan Thomas

CNN to end daily Snapchat show ‘The Update’ from 2018

Are Banks Open on President’s Day 2021? Here is everything you need to know...