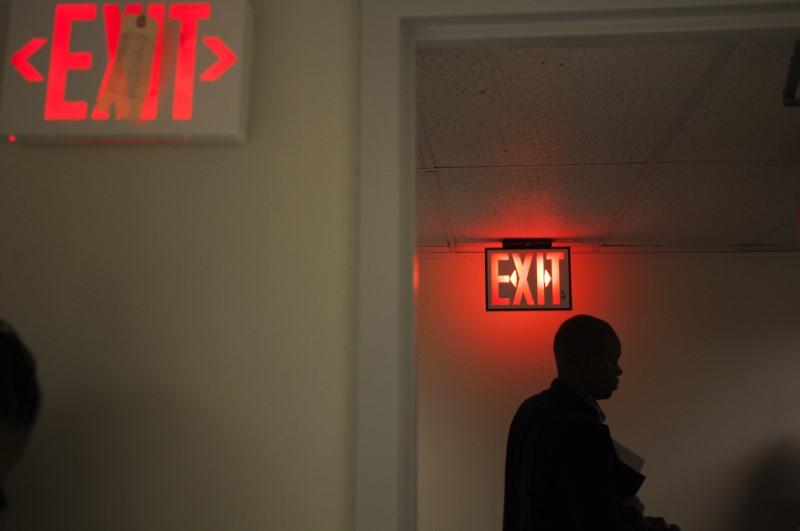 COLUMBUS, Ind. (Reuters) – When Sandy Vierling took a job at a new robot-packed factory her company built just a few miles from an older plant where she made automotive exhaust systems, she crossed into the future of manufacturing in the United States.

Auto supplier Faurecia SA’s (EPED.PA) new plant – dubbed Columbus South to distinguish it from the older operation known as Gladstone – is glistening clean and the physical work is lighter. But the 57-year-old found her new job had long hours and was monotonous – loading parts onto conveyors that fed robots all day. She also missed the interaction with coworkers she had at Gladstone.

Other workers at the new plant complain that they do not get to fix machines when they jam. Technicians swoop in to do that.

“I was stressed all the time,” she said.

President Donald Trump has put bringing manufacturing jobs back to the United States at the center of his economic and trade agenda. But when jobs actually come – as they have here in southern Indiana – many factory workers are not prepared for them, and employers are having trouble hiring people with the needed skills.

U.S. manufacturing job openings stand near a 15 year high and factories are hiring workers at the fastest clip since 2014, with many employers saying the hardest-to-fill jobs are those that involve technical skills that command top pay.

Mark Muro, a senior fellow at the Brookings Institution, said the digitalization sweeping the economy is forcing employers to hunt for a different mix of workers – and pay more in some cases for workers with technical skills.

A new study by Muro found those with the highest digital skills saw average wage growth of 2 percent a year since 2010, while wages for those with medium skills grew by 1.4 percent and those at the bottom by 1.6 percent.

The skills mismatch is playing out at Faurecia’s factories in Columbus.

The company’s older Gladstone plant has 500 production workers and only a handful of robots. The new plant, Columbus South, has about 400 workers and about 100 robots, including 30 automated guided vehicles that move materials instead of human-driven tugs. Both plants make exhaust systems.

Faurecia invested $64 million in its new plant, and invited trained workers from the old plant to apply for jobs in the new one. Many workers, including Vierling, were lured by higher wages. She saw her pay jump from $16.65 an hour to $18.80 at Columbus South. About 150 made the move, according to the union that represents workers in both facilities, the International Brotherhood of Electrical Workers.

There’s no plan to shutter the older plant, but rather to introduce automation there in phases as well.

But some said no to the opportunity.

Christina Teltow says she never even considered it. She is 42 years-old, and has spent 22 years at Gladstone. She was recently promoted, but previously worked as “gap leader,” one of the better jobs someone with a high school education can attain at the plant. That job includes overseeing the schedules of workers and monitoring the quality of parts.

The same job at Columbus South requires 16 credit hours from the local technical college in business administration as well as learning to use computers to track production and schedules.

”Here, I get in and work on machinery,“ she said. ”In South, it’s totally different — it’s all robots.”

The company says one reason the new plant needs a lot of robots is because it produces a different kind of product. Gladstone mostly makes exhaust systems for light vehicles, while Columbus South is dedicated to much beefier commercial exhaust systems used mainly on large trucks. One worker can easily lift most of the parts at Gladstone, while some parts at Columbus South weigh up to 260 pounds.

Without robots, the new plant would need many more workers just to move things around, said managers.

Of course, robots have been in factories for decades. The difference now is that the machines are being linked together in networks that allow more oversight and control. At Columbus South, managers and engineers walk around with iPads that allow them to watch production levels in real time and even less-skilled workers have to know the basics of how to use computer drop down screens and entering data.

Leading the way onto the factory floor, manager Mike Galarno points to the front of one of the long production lines dotted with robots to a large video screen that tracks production in real time.

At the old plant, each part of the operation was like an island. If a problem arose, the people working there could sort it out without ever coming to the attention of managers, he said.

“Here, it’s all data – and everyone is looking and reacting to it,” he said.

This type of work requires some workers with skills normally found in high-tech, not in auto parts factories. Drawing those workers to Columbus – and keeping them – has posed another challenge.

One of the first employees hired for Columbus South last year was Chase Chapman, a mathematician and data-management specialist who was finishing a five-year stint in the Navy. The company moved Chapman and his young family from Florida, so he could become the plant’s head of data analytics – a position that doesn’t exist at Gladstone or at any other Faurecia exhaust system factory.

He left in April after only eight months, citing the desire to be closer to his extended family.

The position has now been empty for months as the company tries to recruit someone new.

Another problem became clear after the new plant was up and running. As a start-up operation—with lots of potential for technical glitches in its highly automated systems—many workers at the new plant work 12 hour shifts, often more than five days a week.

Those long hours have worn on workers like Vierling. “I was making all that money, but I had no time to spend it,” she said.

Workers from Gladstone were required to stay at the new plant a year before seeking a transfer back. Last month, Vierling returned to her old workplace. She gave up most of the $2 an hour raise she got for moving, but does not regret it.

“I feel like I’ve gone back home,” she said.

Researchers have found the source of life in the universe

Who was the first NFL coach to be doused with gatorade after a Super...

Coronavirus Canada updates: Alberta reports its most daily cases in over a month

An eyewitness described “pure chaos” outside a Montreal polling station where a vehicle struck nine people Monday afternoon, including a young child. “I saw two...

Canadian Prime Minister Justin Trudeau hung onto power on Monday as his main rival conceded defeat, saying he had won a clear mandate to...

Five people have been arrested after a woman poured liquid on the backside of Victoria Police Department Chief Del Manak during a memorial for...

Pub manager Crystal Meikle is used to pivoting with the shifting rules for businesses during the COVID-19 pandemic. But Ontario's proof-of-vaccination policy, set to take...