The Saskatoon Fire Department says a blaze that destroyed a house and a garage in the Pacific Heights area early Saturday morning was the result of an unattended open-air firepit.

A fire investigator has confirmed the fire originated in an illegal container without a screen and quickly spread to a nearby garage before extending to the rear roof of the house.

Fire crews received several 911 calls at about 1:10 a.m. Saturday about the fire, and when they arrived at the home in the 300 block of Johnson Crescent, the detached garage was fully involved in fire, with flames extending towards the rear of the house.

Firefighters were able to bring the blaze under control at around 3 a.m.

Two occupants who had been unaccounted for, a man and a woman, were confirmed not to have been home at the time of the fire. Two dogs died in the blaze and were found and removed by firefighters.

The house and garage were a total loss at an approximate value of $400,000.

The Community Relations section of the Saskatoon Fire Department will be conducting an After the Fire follow-up in the immediate area surrounding the fire scene. Informational packages will be handed out to more than 100 residences in the Pacific Heights neighbourhood.

The fire department is reminding the public to burn responsibly, respectfully and safely when choosing to have an open-air fire. 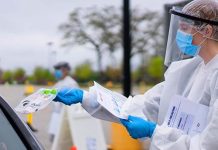 ‘The Goonies’ Cast Raises Over $100K for No Kid Hungry During Charity Script Reading,...

Ontario is reporting 1,616 new COVID-19 cases on Tuesday. The provincial total now stands at 513,102. It is the lowest daily case count since late...

A SpaceX Falcon 9 launched another group of Starlink satellites May 15 on a mission that included two rideshare payloads. The Falcon 9 lifted off...

Prime Minister Justin Trudeau will announce a nearly $200 million investment Tuesday in a facility designed to manufacture mRNA vaccines in Mississauga. The money from...

Manitoba announced 335 new COVID-19 cases and one additional death on Tuesday. The death is a man in his 70s from the Winnipeg health region,...

Ontario health units are asking for patience and warning of limited COVID-19 vaccine appointments after all adults in the province became eligible for shots...

Researchers puzzled at discovery of rust on the Moon

Ont. education minister to announce today when schools will reopen