In a media release, the province reported 18 more recoveries and 11 new cases, lowering the number of active cases being reported to 123.

The new cases — three each in the north-central and Saskatoon areas, one apiece in the northwest, central-east, Regina and southeast zones and one currently without a known location — increased the province’s total to date to 1,846.

So far, 1,699 recoveries have been recorded. To date, 24 residents of the province have died after testing positive for COVID-19.

Eight people are receiving inpatient care in hospital, with seven in Saskatoon and one in the south-central zone.

The total comprises 919 community contacts, 533 cases without any known exposures, 278 travellers, and 116 cases that are being investigated by public health. 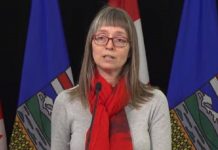