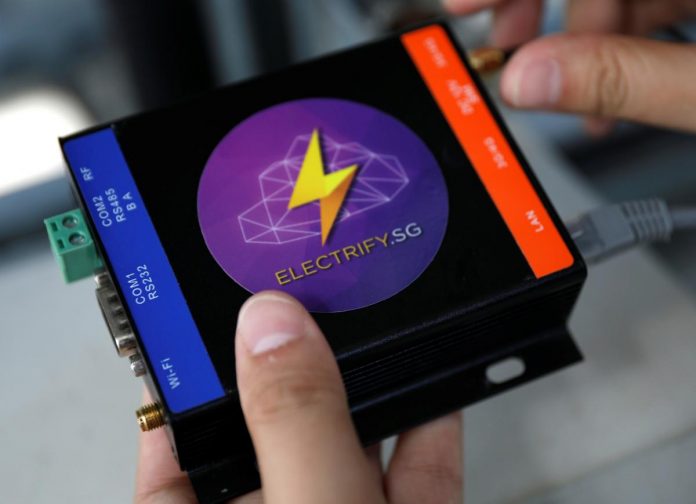 SINGAPORE (Reuters) – Energy startups have been using blockchain to power electricity sharing in microgrid trials from Texas to Tasmania for a year or so.

But now companies are moving beyond trials to commercial projects, leveraging the distributed ledger technology for payments and trading on a city-wide and even national scale.

“What the internet did for communications, blockchain will do for trusted transactions, and the energy and utilities industry is no exception,” said Stephen Callahan, Vice President, Energy, Environment & Utilities, Global Strategy, at IBM.

The trend illustrates how blockchain is swiftly moving beyond financial services and cryptocurrencies, and offers a glimpse of a growing challenge to the $2 trillion energy market.

Blockchain is a database of transactions distributed among multiple computers. It solves two key problems in the online world: transacting without the need of a trusted intermediary, and making sure those transactions can’t later be altered, removed or reversed.

This appeals to the energy industry in several ways. As the market liberalizes and renewable energy grows, blockchain offers a way to better handle the increasingly complex and decentralized transactions between users, large- and small-scale producers, retailers and even traders and utilities.

Blockchain’s use of tokens also offers a way to reward users for saving energy, and for small-scale transactions between individual users with solar panels who are both producers and consumers – known as “prosumers”.

Being able to add “smart contracts” onto a blockchain would also make it possible for actions to generate automatic transactions down to the smallest level, where meters and computers could autonomously reconcile supply and demand.

“The prospect of being able to track particular electrons via a blockchain as they move onto or off the energy grid has captured the imagination of many companies,” said Daniel Sieck of U.S. law firm Pepper Hamilton.

All of this would save money and could transform the way we produce, store and consume electricity, what DHL Energy president Steve Harley calls the “internet of electricity.”

The World Energy Council predicts that such decentralized or distributed energy will grow from 5 percent of the market today to 25 percent in 2025.

The past few years have seen proofs of concept and trials, from small microgrids to projects by big players such as Shell (RDSa.L), BP (BP.L) and IBM (IBM.N).

“The ones that are engaging in the conversation are largely doing ‘blockchain tourism’ without developing applications.”

That leaves opportunities for newcomers.

Power Ledger, an Australian startup which raised A$34 million ($26 million) in an initial coin offering, or ICO, in October, is building platforms to enable commercial operation ofmicrogrids in Thailand and India and two commercial buildings in West Australia.

It also recently launched a 200-customer trial microgrid with power retailer Origin Energy (ORG.AX) in Sydney. Energi Mine, a UK-based startup, has created a blockchain-based platform to reward energy-saving users with tokens they can use to pay their energy bills or charge their electric vehicles.

It says it is already making money, albeit from the artificial intelligence side of its business.

A Singapore company called Electrify has been running a price comparison marketplace as the country liberalizes its electricity market. Electrify plans to launch a blockchain-based exchange for all consumers and producers next year, and is talking to one of Japan’s biggest utilities <words deleted>about doing something similar there.

Grid+, a U.S. startup, will launch its first retail device next year in Texas, using the Ethereum blockchain to allow users, whether they’re traditional consumers or owners of solar panels and batteries, to buy and sell electricity at wholesale prices.

More projects are on the way. Energy startups will have raised about $200 million from initial coin offerings this year alone, with a dozen more planned next year, according to data collected by Reuters.

But obstacles remain. They include the entrenched nature of the incumbents, and questions about blockchain itself, which is less than a decade old.

Martha Bennett, an IT industry analyst at Forrester, points to a “misunderstanding just how immature the technology is.” Then there’s the regulatory landscape. “Because the energy sector is a regulated industry,” said Pepper Hamilton’s Sieck, “widespread adoption of many possible blockchain use cases will require regulator buy-in.”

There are signs of that. Singapore’s Energy Market Authority launched a sandbox for energy innovations in October, while U.S. states including Vermont have passed legislation designed to help apply blockchain technology.

Skeptics say blockchain may help incumbents rather than disrupt them.

However many individuals choose to capture, store and sell power, there will still be a lot of users who won’t bother, says Hugh Halford-Thompson, of BTL Group, which has this year completed gas trading pilots on its internet blockchain with BP, Eni (ENI.MI) and Wien Energie.

“As a result we are going to see a lot of the larger firms adopting blockchain and absorbing it.”

Others disagree, arguing blockchain will empower individuals by automating much of the drudgery of switching between sending power to the grid and receiving it.

Omar Rahim, CEO and co-founder of Energi Mine, says blockchain will change user behavior and utilities will only be used when prosumers’ demand and supply don’t match.

Most likely, says Tony Masella, an energy consultant at Accenture, it will be more of an evolution.

Like the network protocols in the early days of the internet, blockchain “will drive dramatic transformation of the energy industry and unlock value” for everyone involved.

“But it will not do so overnight.”

Coronavirus: PM says Canada will have enough COVID-19 vaccines for a ‘one-dose summer’

Covid-19: Majority of Cdns anticipate another lost summer due to COVID restrictions (poll)

Police say they are investigating the death of a toddler in southeast Calgary. Emergency crews were called to a home in the community of Midnapore...

Canadian employers project the national average base salary to increase by 4.2 per cent next year, a new survey says. According to the report by...

Two Mississauga residents are facing charges in relation to a recent robbery at a local pharmacy. At 1:33 p.m. on Thursday, Sept. 22, two suspects...

An officer is in hospital after attempting to stop a stolen vehicle on Sunday, Sept. 25. According to a release from the Stormont, Dundas...

Walmart Vaccine Registration: How can I schedule a COVID vaccine appointment?