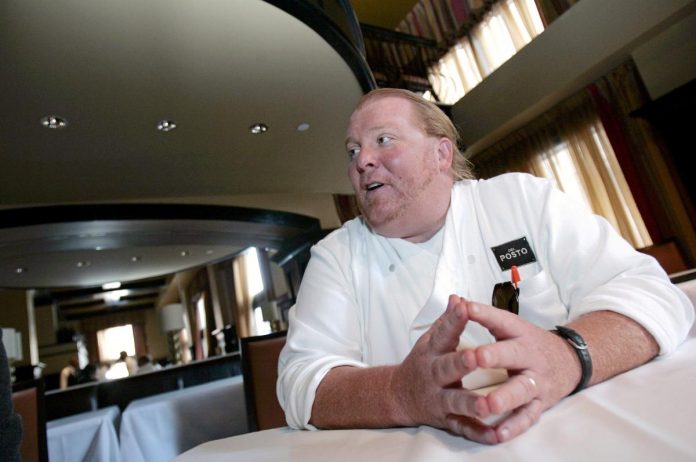 NEW YORK (Reuters) – ABC Television Network said on Friday that it fired celebrity chef Mario Batali from its daytime cooking show, “The Chew,” after he was accused of sexual misconduct.

Online food trade publication Eater New York reported on Monday that four women, who were not identified, accused Batali of touching them inappropriately in a pattern of behavior that spanned at least two decades. Three worked for the chef during their careers, according to Eater New York.

”Upon completing its review into the allegations made against Mario Batali, ABC has terminated its relationship with him and he will no longer appear on “The Chew,” a spokeswoman for ABC, a unit of Walt Disney Co (DIS.N), said in a statement.

Batali’s representative, Risa Heller, did not immediately respond to requests for comment on Friday.

In a statement emailed to Reuters by Heller on Wednesday Batali said: ”I apologize to the people I have mistreated and hurt. Although the identities of most of the individuals mentioned in these stories have not been revealed to me, much of the behavior described does, in fact, match up with ways I have acted.

“That behavior was wrong and there are no excuses. I take full responsibility and am deeply sorry for any pain, humiliation or discomfort I have caused to my peers, employees, customers, friends and family.”

Reuters could not independently confirm the accusations.

On Monday, Batali said he had stepped away from his restaurant company B&B Hospitality Group, which services about 24 restaurants owned by Batali and other chefs.

Food Network said in an emailed statement on Friday that the broadcasting network has canceled plans to relaunch “Molto Mario,” the cooking show that helped launched Batali’s career, in light of the accusations.

Batali’s reputation as a master of Italian food turned him into a restaurant executive, television star, author and one of the world’s most recognizable chefs. He premiered on Food Network in 1997 on the show “Molto Mario” and in 2011 helped launch “The Chew” on ABC.

Coronavirus Canada updates: Four cases in a week for Newfoundland and Labrador after everyone...

The UAE has successfully launched its first Mars mission, Watch