A 38-year-old woman who was missing in Utah’s Zion National Park for 12 days was found alive over the weekend and has been reunited with her family.

Holly Courtier, from California, was found on Sunday by park rangers, according to the National Parks Service.

Courtier had vanished on October 6 after getting off a shuttle bus at Zion’s Grotto Trail area. It’s unclear how she survived in the park for 12 days.

“We are overjoyed that she was found safely today,” Courtier’s family said in a statement to the National Parks Service. “We would like to thank the rangers and search teams who relentlessly looked for her day and night and never gave up hope. We are also so grateful to the countless volunteers who were generous with their time, resources, and support. This wouldn’t have been possible without the network of people who came together.”

Neither Courtier’s sister nor daughter immediately responded to Insider’s requests for comment, but the family members told ABC News that Courtier was an experienced hiker.

Courtier’s daughter, Kailey Chambers, told ABC News that her mother had recently lost her job and was visiting national parks during her time off from work.

Jillian Courtier-Oliver, Courtier’s sister, told ABC News that Courtier — who is 5-foot-3-inches and weight 100 pounds before her disappearance — was found with bruises all over her body and had lost weight.

“I knew if anyone could do it, it was going to be her,” Courtier-Oliver told ABC News of her sister’s survival. “She’s such a fighter.”

Courtier-Oliver said Courtier is recovering with her family. 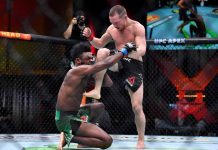 Coronavirus Canada updates: Fewest deaths in Quebec since April, another low in cases

The economic and life disruption caused by the COVID-19 pandemic has prompted some recent immigrants to leave Canada and return to their countries of...

The province is putting new measures in place it hopes will avoid the issues many people ran into earlier this week when they tried...

New Brunswick will move the entire province to the yellow phase of recovery, effective midnight Sunday. “This is based on our continued positive trajectory of...

Media accreditation is now open for NASA’s SpaceX Crew-2 mission to the International Space Station. This is the second crew rotation flight with astronauts...