The House of Representatives voted on Monday to increase stimulus checks to $2,000 from $600. The measure now goes to the Senate, where its fate is largely in Majority Leader Mitch McConnell’s hands.

If McConnell isn’t able to rally the GOP around supporting these new stimulus payments, it could cost Republicans the runoff elections in Georgia on January 5, the results of which will determine control of the Senate.

McConnell was initially opposed to a second round of stimulus checks.

House Democrats in May passed the $3 trillion HEROES Act, which called for a second round of $1,200 checks. But McConnell declined to bring up that bill in the Senate, opting to try to pass a “skinny” stimulus package that did not include direct payments.

Negotiations before the November election stalled. More than a month after the election, the House and the Senate passed a $900 billion COVID-19 relief package that included $600 direct payments.

McConnell has tied the relief package to the Georgia races in the past.

Two weeks ago, The New York Times reported that, in private calls, McConnell described Sens. Kelly Loeffler and David Perdue – the GOP’s candidates in the Georgia runoff elections – as “getting hammered” over an initial lack of GOP support for additional stimulus checks.

McConnell later agreed to include $600 checks in the $900 billion relief package, reportedly in recognition of the political cost to the two Republican senators.

But then President Donald Trump bashed the bipartisan package that Congress sent his way last week, saying the $600 checks were “too small” and demanding they be increased to $2,000.

Though Trump ultimately signed the package, he has continued to call for $2,000 direct payments, which the House passed on Monday.

If he embraces a larger direct payment, he risks splitting the party and contradicting the hard-line strategy of citing concerns about the federal budget deficit.

McConnell was largely absent from the stimulus-package negotiations before the election, as he was focused on confirming Amy Coney Barrett to the Supreme Court. He left them to Treasury Secretary Steve Mnuchin and House Speaker Nancy Pelosi.

After the election, some Republicans voiced concerns about the deficit, which threatened to scuttle another relief package. The Times reported last week that McConnell “initially resisted another stimulus package, saying that Congress should pause and consider the deficit before providing more relief.”

If McConnell kills the measure with larger direct payments by not allowing it to be considered, or if he brings it to a vote and it fails, Georgia’s Democrats are likely to spend their final days campaigning on the fact that Senate Republicans blocked larger stimulus checks.

The measure would need 60 votes to pass in the Senate, meaning all Democrats and the two independent senators who caucus with them would need 12 Republicans to vote with them.

Some high-profile GOP senators, such as Sen. Marco Rubio, have urged their fellow Republicans to support sending $2,000 checks to Americans making under $75,000.

“I agree with the President that millions of working class families are in dire need of additional relief, which is why I support $2,000 in direct payments to Americans struggling due to the pandemic,” Rubio said in a statement before Monday’s House vote.

Perdue and Loeffler waffled before eventually supporting the $600 stimulus checks.

After Trump slammed the $900 billion package and called for larger direct payments, Loeffler said she could support an increase “if it repurposes wasteful spending.” Perdue has avoided answering questions about $2,000 checks.

Their Democratic opponents, the Rev. Raphael Warnock and Jon Ossoff, immediately backed increasing the checks to $2,000.

McConnell’s best bet to keep the Senate may be to get the votes and get on board with the House. 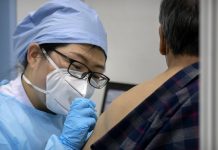 US Air Force members in Winnipeg say they were attacked, Report

Bill Gates may no longer be the world’s richest man, but he can claim a new title: America’s farmland king. The billionaire Microsoft co-founder has...

Ottawa Public Health is reporting 123 more people in the city have tested positive for COVID-19 and one more resident has died. However, the health...

Police broke up two large gatherings of anti-lockdown protesters in downtown Toronto on Saturday and arrested three people, including the organizers, as authorities step...

Cases of COVID-19 in Canada have now surpassed 700,000, according to a Global News tally updated with the latest data from health officials. The milestone...

Saskatchewan schools need $1.3B in repairs